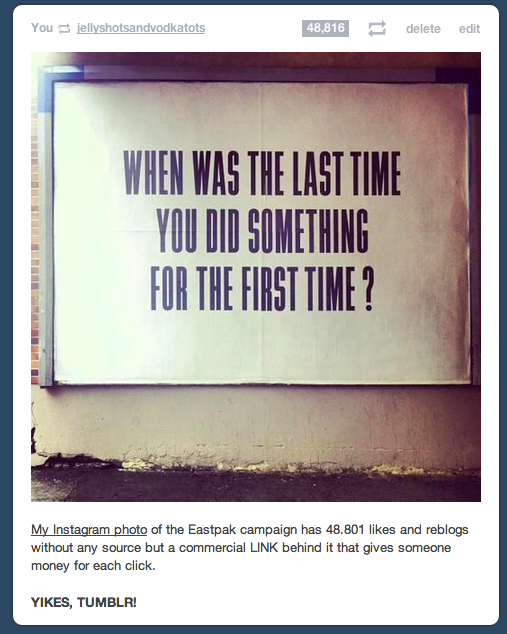 So after an eternity trying to find a contact form and several emails being sent back and forth I managed that tumblr staff would take my photo down. I didn’t get any information on who was the origin on that post or who in that long chain of 50.000 notes inserted the advertorial link behind it due to privacy reasons. Although I should be satisfied, just my photo has been deleted and all the reblogged posts with the link that gets Mr.Anonymous 2 cents for each click are still there.

I wouldn’t make such a fuzz about it, but I am concerned about this trend. Of course, there’s been reblogging and sharing stuff without credit ever since and I don’t consider my photo a piece of art, but using viral posts for third party profit is new to me within this “community”. At first you wonder why something inappropriate with that high amount of attention wouldn’t get noticed by the tumblr staff, but after seeing them just deleting the photo and keeping the link, I really don’t wonder about anything anymore.

One would think a company as big as tumblr would take better care of their product.

Pentagram to kickstart a reprint of the NYCTA

Where do you think ideas come from?

Features are meaningless. They mean nothing to users. A coherent product user interface is the product to users.
-Kim Goodwin
Tweet